A Sunday on Jamaica Bay 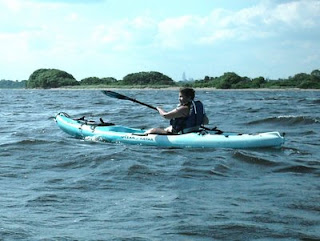 My wife Vicki (that is her in the photo at right, heading back to Sebago, with the Empire State Buidling above her head in the background) and I finally had some free time at the same time (a rarity these past few months) that coincided with some good weather so we headed down to the Sebago Canoe Club and took our sit-on-top kayaks out into Jamaica Bay. It was the first time I had been kayaking in two months. It had been even longer since Vicki and I kayaked together.

We had intended to head to The Raunt but after paddling for two hours into a strong wind opted to beach on Ruffle Bar instead. As we approached closer to Ruffle Bar we saw a couple other kayakers that ended up also being from Sebago. We beached, dragged our boats up on shore, and aet the lunch we had intended to eat on the Raunt. We broke out our Subway subs and a couple cans of Cherry Coke and enjoyed our lunch out of the wind but under the sun. As the tide came in and lapped against our boats we packed up and headed back to Sebago. With the wind at our backs and surfing a few waves our return trip seemed to take half as long and was twice as enjoyable as our paddle out had been frustrating.

Back at Sebago, as we were taking our boats up to the wash racks, we met Bonnie. She had returned just ten minutes earlier from her paddle all the way from Governor’s Island. We congratulated her on the accomplishment and then rinsed our boats, packed up our gear, and headed home.

All in all it was a good afternoon on Jamaica Bay. The water was warm. The sky was blue with a few high clouds. Power boat traffic was minimal.
Posted by John Edward Harris at 9:34 PM