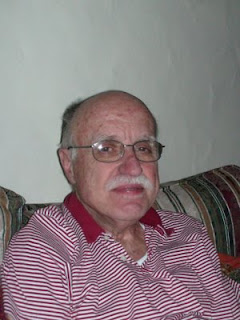 I and six other Presbyterian Church (U.S.A.) Ministers of the Word and Sacrament recently gathered for lunch at the home of colleague in ministry and friend Charles Brewster (photo right) to say farewell and which him Godspeed. Charlie recently retired as the Pastor of the multicultural First Presbyterian Church of Forest Hills and he will soon be moving to Dallas, Texas, where he plans to eventually move into a Presbyterian retirement facility.

Several of us would usually gather at Charlie’s home once a month for fellowship and lunch. Our time together would usually focus on catching up with one another’s lives and ministries, talking about national as well as New York State and City politics, talking shop (theology), and commiserating about our dysfunctional New York City Presbytery. After an hour or so up conversation we would move from the living room to the dining room to enjoy a light lunch. Then we would all go on our way.

Until recently Charlie and I served together on New York City’s Committee on Ministry and would regularly sit next to each other at committee meetings, sharing notes, ideas, and impressions as the meeting progressed. Since he has a long history in the Presbytery and I am a newcomer, Charlie has been instrumental in helping me make entry. His command of Biblical Greek has been legendary, evidenced by his nearly constantly carrying a Greek New Testament around with him wherever he went. Since his retirement he has also filled in at the pulpit of North Church Queens a few times when I was away.

Charlie has truly been a valued colleague in ministry and I will miss his local presence. Farewell and Godspeed, Charlie.
Posted by John Edward Harris at 10:19 PM

John, Thanks for letting us know about Charles. I'll miss him too. I have tons of relatives in Dallas. I don't get there much but the next time I do I'll have to check in on Charles. <> Elder Lloyd R. Johnson