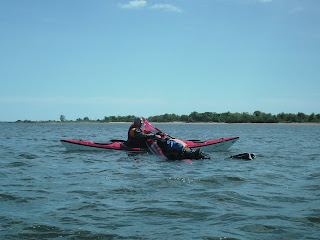 It had been three and a half months since I paddled on the proxigean tide. That was January 30th, when the air temperature was 15°f and the water temperature was probably in the 40’s. Last Saturday the water temperature at the Sebago dock was 58°f. Under the Belt Parkway Bridge it was 60°f. Out in Jamaica Bay it was 56°f. The air temperature was near 70°f. The sun was shining and the wind was blowing, really blowing. Had a beginner’s paddle been scheduled it would have been cancelled due to the wind. But the eleven of us that would later be out on the water were not beginners.
Earlier in the morning we started gathering in the clubhouse of the Sebago Canoe Club in Canarsie, Brooklyn. With some confusion about the schedule, we started straggling in for the Trip Leader Workshop beginning 8:30 AM, with more arriving at 9:00, 9:30, 10:00 and our final participant arriving at 10:30 AM.

A little before 10:00 AM the odd assortment of future trip leaders (or was it an assortment of future odd trip leaders) and experienced trip leaders and instructors watched segments of the Leo Hoare and Olly Sanders Sea Kayak DVD as it played on Walter’s Mac Book Pro. We focused primarily on rescues and towing. Later in the morning we discussed what was required of a trip leader in general and a Sebago Canoe Club Trip Leader in particular. We also reviewed and discussed the procedures related to Sebago’s Wednesday evening and Saturday morning open paddles when most of us would be leading and assisting with trips.
During the paddling season, as conditions permit, The Sebago Canoe Club welcomes up to fifteen walk up first time paddlers for an “Open Paddle” on Paerdegat Basin and Jamaica Bay. After signing an insurance waiver and being asked for a $10 donation to cover costs, open paddle participants receive a brief introduction to paddling and paddling safety and are then taken out as a group onto the water. With a Leader/Participant ratio of 1/5 or better, Sebago needs at least one trip leader and two assistants for every open paddle.
After our classroom work we took a short break and then put on our dry suits, wet suits, and paddling jackets as we prepared to head out onto the water. Five future trip leaders and six current trip leaders and instructors paddled straightaway down Paerdegat basin and under the Belt Parkway Bridge out into Jamaica Bay.
Whether it was the wind or the tide or whatever, Walter’s boat edged up to mine from behind and before I knew it I was rolling over into Jamaica Bay, the unintentional victim for the first rescue practice of the day. Ted paddled up to my boat and following his instructions we emptied my boat of as much water as possible and I climbed back in. From my perspective the most difficult part of the rescue was playing dumb, i.e. pretending I was an inexperienced paddler who knew nothing about rescues and who needed to be talked through the procedure by the assigned trip leader.

Within the next hour or so Phil would intentionally capsize several times so that each of the future trip leaders could practice their rescue skills (photo top right). Phil so dramatically portrayed paddlers panicking that most of us thought he was bucking to get out of the set shop and onto the stage. In our minds, at least, he deserved a Tony for his portrayal of the inexperienced kayaker from hell that will not listen to directions and therefore endangers others by standing up on his kayak as he is being rescued. Meanwhile, Bonnie feigned an avid bird watcher who strayed away from the group in order to test the observation skills of the assigned leaders and their ability to keep the group together.

Though I have owned and carried a tow belt since last season, Saturday’s workshop was the first time I have actually used one as Jerry acted the part of a tired paddler who needed to be towed back to dry land. Towing, even into the wind, was easier than I thought it would be, though I was glad I did not have to tow Jerry all the way back to the dock.
Back at Sebago, after rinsing and stowing our gear, we debriefed over hamburgers, hot dogs and assorted beverages prepared by our Commodore John Wright. All in all it was a good day of learning, fun, and comradeship.

While additional Sebago Instructors and Trip Leaders participated in the morning classroom segment of the training, the eleven that paddled in the afternoon practical session, in addition to myself, included Dan, Ted, Hillary, Andy, Severin, Jake, Phil, Bonnie, Jerry, and Walter.
More pictures from the day have been posted on my Picasa page.
Posted by John Edward Harris at 9:36 AM