A Musical Journey with Paul 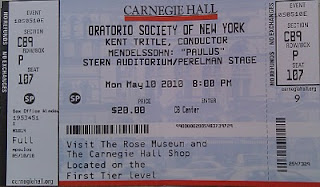 Last evening I had the opportunity to listen to the story of the Apostle Paul, from his witnessing the stoning of Stephen to his departure from Ephesus for Jerusalem. I was not listening to a Books on Tape CD or attending a dramatic reading. I was present in Carnegie Hall for The Oratorio Society of New York’s presentation of Felix Mendelssohn Bartholdy’s Paulus with Kent Tritle conducting .
I am not a big Mendelssohn fan and prior to last night I was familiar only with his Hebrides Overture. Last night’s performance, however, won me over, even though it paled in comparison to the Society’s March performance of Cherubini’s Requiem in C Minor and William’s Five Mystical Songs.
Since the Oratorio was performed as it was written, in German, electronic subtitles were provided on a small electronic sign hanging above the performers. At first I found the sign distracting. After a few movements, however, I found it necessary in order to follow the performance, as my German is naught.
I am aware that Kerygma offers a two part Bible Study using the text and musical commentary of Handel’s Messiah. I wonder if a similar study using the text and musical commentary of Mendelssohn’s Paulus might be possible.
Since last night’s perfomance won me over as a fan of Mendelssohn, I now look forward to the Society’s presentation of his Elijah (in English, I think) on Wednesday, April 27, 2011.
Posted by John Edward Harris at 10:36 AM

It looks like last night was a musical night. My wife, Dora, and I were at the Blue Note in Greenwich Village enjoying the vocal styling of Nancy Wilson.

Glad you enjoyed this--I love this oratorio. I love the Elijah even more. I've had the chance to sing it a couple of times as a chorus member (in English!

Thanks for commenting, KS and QC. What I did not mention in the original post was that my wife is a member of the Oratorio Society of New York and sings First Soprano. Here is a link to the New York Times review of the performance. http://www.nytimes.com/2010/05/12/arts/music/12oratorio.html?emc=eta1