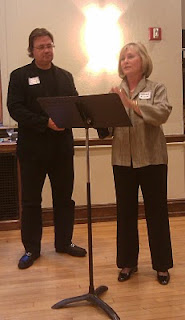 You might expect to find friendship, inspiration and hope in a church, but wine and hors d’oeuvres (not counting the Eucharist)? What about enjoying wine and hors d d’oeuvres in a church not only with supporters of the GLBT community but at least one out lesbian Minister of the Word and Sacrament? In New York City, yes!

I recently had the opportunity and pleasure of attending “A Covenant Network Fundraising Event” hosted by the Revered Dr. Scott Black Johnston and the Reverend Dr. Jon M. Walton. The event was held in a third floor multipurpose room at Fifth Avenue Presbyterian Church in upper Manhattan.
Guests included the Reverend Deborah Block and the Reverend David Van Dyke, Co-Moderators of the Covenant Network, who briefly discussed challenges before the 219th General Assembly, featured in the photo to the right.

Special Guest the Reverend Cheryl Pyrch, Pastor of Summit Presbyterian Church, Philadelphia, shared her ordination story and, as much as the cloture of a presbytery meeting in executive session would allow, her being called to serve in Philadelphia Presbytery.

Takako Terino briefly spoke about the work of Presbyterian Welcome.
The pinot noir was smooth. The cheese, crackers and fruit were delicious. The progressive and enlightened company was sociable. I have no idea how many people were invited to this event but I was a little surprised there were not more in attendance. After all, this is New York City and Fifth Avenue. I also do not know how much money Covenant Network raised, but if it at all serves to raise the level of debate and awareness of the current exclusive and unjust policy of the Presbyterian Church (U.S.A.) which excludes the Ordination of Gay, Lesbian, Bisexual and Transgender individuals who do not pledge themselves to chastity, then it will be money well raised.
Posted by John Edward Harris at 12:01 AM