South Dakota, Where Are You? 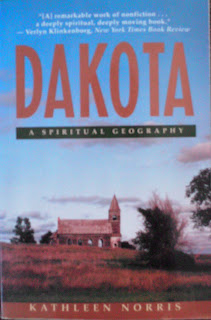 Back on December 7, I was hoping to soon log visits from both Montana and South Dakota, the only two states at that time without a recorded visit to Summit to Shore. The next day, December 8, two visits from Montana were recorded, leaving South Dakota as the lone holdout.

The New Year has arrived and still there has been no recorded visit from South Dakota. Since I did not launch Summit to Shore until January 5, 2009, there is still time remaining for South Dakota to step up to the plate. (hint, hint)

If I knew anyone in South Dakota I would call or email them and ask them to visit Summit to Shore. The only name I can associate with South Dakota, however, is that of one of my favorite authors, Kathleen Norris. While I know her through her writing, she doesn’t know me from my reading, so I really can't call or email her. Besides, she might be in Hawaii this time of year.

Several years ago I read Dakota: A Spiritual Geography but could not remember if Kathleen was living in North Dakota or South Dakota. Having already read Amazing Grace: A Vocabulary of Faith, The Cloister Walk, and The Quotidian Mysteries, I am now finally getting around to reading The Virgin of Bennington. Reading the second chapter of Virgin reminded me that Kathleen’s grandparents had lived in Lemmon, South Dakota, where her mother had grown up, where she had spent her childhood summers, and where she now sometimes lives and writes, dividing her time between South Dakota and Hawaii.

Lemmon is the home of the Spencer Memorial Presbyterian Church, with 117 members in 2008, one of those members being Kathleen Norris. Kathleen has regularly preached at her home church. I had the opportunity to hear Kathleen Norris preach at the 209th General Assembly (1997) of The Presbyterian Church (U.S.A.) meeting in Syracuse, NY and thought she was an outstanding preacher. I used to have a recording of her sermon but loaned it out and it was never returned. One of these days I will get around to reading the only book by Kathleen that I have not yet read, Acedia and Me.

Kathleen's home state of South Dakota became a state on November 2, 1889. It is also the home of Mount Rushmore National Monument. The Capital is Pierre. To date, it is the only state out of 50 without a logged visit to Summit to Shore. (another hint)

What could residents of South Dakota possibly have against me? Is there no internet there? While South Dakota has no shore, it certainly has some summits. At 7,242 feet, Harney Peak, the state's highest, is higher than any peak east of the Mississippi. Shorely somone from South Dakota has to eventually stumble onto this blog.
Posted by John Edward Harris at 9:39 AM

Waving madly.... Here... Here I am... I grew up in tne Pacific Northwest, but I've lived in the North Eastern portion of South Dakota since 1970 (a lot longer than I lived in the PNW). I'm a long way from Mt. Rushmore and peaks of any kind. My house is on the flattest part of the prairie. I can see the sun rise over the horizon from my back porch, and the sun set over the horizon from my front porch. I live in wheat (and soybean and corn) country. It's starkly beautiful, and right now, covered in snowdrifts.

JuMpInG uP aNd DoWn In GlEe! Finally, a visitor from South Dakota. Thanking you, Kathleen, forleaving a comment.