Epiphany – Busting Myths and Other Thoughts 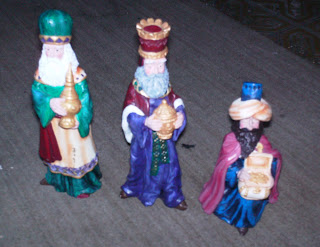 Just before Christmas I took our dog Myrrhlyn to the Vet for some routine vaccinations. When I explained that Myrrhlyn’s name was a Welsh spelling variation of the magician of Arthurian Legend and that his name was also an allusion to Myrrh, as in gold, frankincense and myrrh, a young Vet Tech responded that she had just recently learned what Frankincense was, and that there were not necessarily three wise men. I responded that they were not necessarily all men.

A footnote to the New Revised Standard Version of the Bible alerts the reader to the fact that the original Greek is “magi” as in magicians, and could just as well be translated “astrologers”. The masculine plural ending of “magi” suggests that at least one of these visitors was male, but one or more could also have been female.

No where does the Gospel According to Matthew enumerate the Magi. The plural ending means there were two or more, but there could have been three, or four, or more. That three gifts—gold, frankincense and myrrh—were presented has suggested that there were three visitors. This number has been immortalized by the popular Carol “We Three Kings”. Unfortunately more people learn their Bible stories from carols and hymns than from Scripture.

I prefer to think of the Epiphany visitors as astrologers/astronomers who did not literally follow a star that moved through the night sky only to stop and hover over Bethlehem but instead carefully observed the night sky, charted the position of the planets and stars, and determined from their relative positions that something significant was happening and went in search of it.

If I had the resources and it were not so cold outside this time of year, I would love to schedule an evening Epiphany service that included sky watching through telescopes. While images from the Hubble Telescope projected onto a screen or the wall might still communicate some awe, there is something to be said about seeing astronomical phenomena with one’s own eye through a telescope. Rather than preaching a sermon I would invite an astronomer to talk about the winter night sky.
Posted by John Edward Harris at 8:41 AM