Where In The World Is Tristan de Cunha? 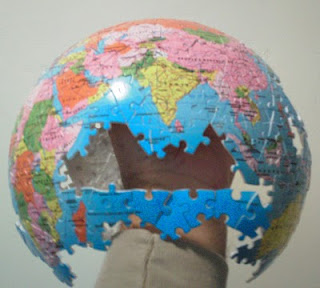 For the past couple of weeks I have been trying to piece the world together one piece at a time, all 540 pieces. During the after Christmas half-price sales I bought a nine inch diameter “The Blue Marble Earth PuzzleSphere”. Piecing it together has tested my knowledge of world geography and manual dexterity, not to mention my patience.

Both poles came pre-assembled. The continents went together fairly easily. North America and South America were eventually joined together as were Europe, Asia and Africa. North America and Asia were easily connected to the Arctic. Antarctica was eventually joined with South America via the southern tip of Chili and Argentina and not long afterward also Australia. The oceans, especially the South pacific and the South Atlantic, are still remaining to be pieced together, which leads me to ask “where in the world is Tristan de Cunha?"

I have a puzzle piece bearing the name Tristan de Cunha and parts of two trade routes, but no latitude or longitude markings. I have had no idea where Tristan de Cunha might be and so no sense of whether the puzzle piece might belong in the South Pacific or the South Atlantic. To help me put the earth together I eventually conducted an internet search and hit, of course, Wikipedia.

According to Wikipedia, Tristan da Cunha is a remote group of islands in the south Atlantic Ocean and the most remote inhabited archipelago in the world. The main island, bearing the same name, is about 7 miles across and has an area of 38 square miles. The Island group has a population of 275.

With those numbers, I am not surprised I was not able to remember, and may never have known, the location of Tristan da Cunha. Now I know and can more easily place the piece in the puzzle. If only real life we so easy.

By the way, all 540 pieces of this puzzle have numbers printed on the back and an arrow indicating where the next highest numbered piece connects, so I could more easily construct the world if I wanted to. If I did that, however, I wouldn’t have wondered where Tristan da Cunha was. Nor would I have been testing my knowledge of world geography, or lack thereof. Yes, I look forward to having a completed globe when I am done, but I did not buy this puzzle just to have a globe. I bought it for the challenge, the fun, and the frustration of least playing United Nation envoy and at most playing God.
Posted by John Edward Harris at 5:49 PM