Justin and the Steelers

My friend Justin is between XI and XII. That sentence leads me to wonder how the Romans expressed fractions any why Roman numerals ever became the accepted way to enumerate Super Bowls. 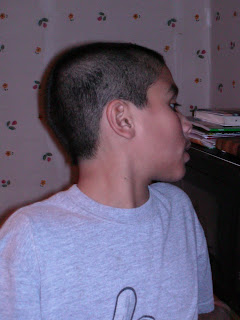 Justin before the game

Neither of Justin’s two dads’ are big football fans, so for the second year in a row I was invited over to their home to watch the Super Bowl with Justin. Last year was my first Super Bowl since I moved to New York City. It was a rush to cheer on, with Justin, our home team Giants in their 17-14 victory over the Patriots. 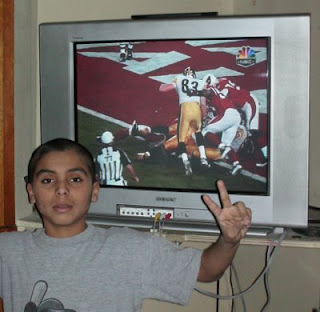 Justin during the game
I went to college 100 miles south of Pittsburgh but still well within the Steel City’s media influence. Many of my classmates were also from the Pittsburgh area and were also Steelers fans. I was a junior in college when the Steelers captured their third Super Bowl victory with a 35-31 victory over the Cowboys. The Next year the Pittsburgh Steelers earned their fourth Vince Lombardy Trophy by outscoring the Rams 31-19.

Four Super Bowl victories in six years! I think that qualifies as a football dynasty. But the Steelers would not reappear in a Super Bowl for another sixteen years. 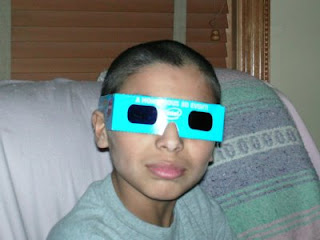 Justin ready for the 3D Commercial
The next time the Steelers went to the Super Bowl was 1996. I was living 130 miles south east of Pittsburgh but within the Baltimore and Washington media Markets. Most of my neighbors and church members were Redskins fans. That year the Steelers lost to the Cowboys in their third Super Bowl matchup. The final score was Dallas 27 – Pittsburgh 17.

It would be another ten years before the Steelers returned to the Super Bowl. In 2006 I was once again living in the Pittsburgh media market, 100 miles south of Pittsburgh. Once again most people in the area were Steelers fans. In Super Bowl XL the Steelers claimed their fifth Super Bowl ring, one for the thumb, running over the Seahawks 21-10. It had been twenty six years since their last Super Bowl win and so this victory was sweet. 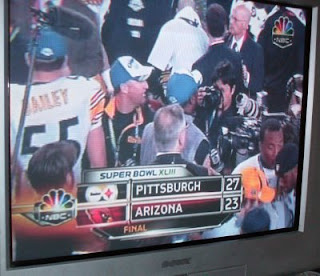 The Final Score XXVII-XXIII
Now, three years later, I live 325 miles east of Pittsburgh and in the midst of the New York City metropolitan area media market. If one is not a Giants fan then one is probably a Jets fan. Steelers’ fans are few and far between. Even my friend Justin, who rooted for the Giants last year, seemed to care less about who won or lost this year’s game. For the record, the Steelers won, defeating the Cardinals XXVII to XXIII, and became the first team in NFL history to win VI Super Bowls. I wonder, in XX years when he is between XXXI and XXXII years old,, will Justin even remember the two teams that played in Super Bowl XLIII and who watched the game with him?
Posted by John Edward Harris at 10:21 AM