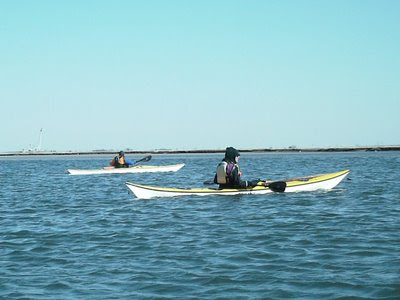 Six hearty paddlers from the Sebago Canoe Club paddled at Jones Beach on Saturday, February 21, 2009, in search of the elusive seal. Led by Tony and Walter, also on the trip were Dottie, Mary, Bonnie and John. The six put in around 11:30 AM and immediately encountered a strong head wind with one to two foot standing waves. After crossing the channel and paddling into the marsh area the wind subsided and a few seals were spotted, but not nearly as many as on the January 10th trip.

Because the low tide exposed so many sandbars, four of the paddlers had to portage a short distance in order to paddle around Deep Creek Meadow and Snipe Islands. Once around Snipe Island the four encountered more head winds, standing waves, and also had to paddle against the tide. In spite of the cold head wind, standing waves, and paddling against the tide, as I paddled into the Sun with sunlight reflecting off the water, there were a few moments where I entered a Zen like state of steady paddling, aware of nothing but wind, water and waves.

All paddlers were out of the water by 2:00 PM. The total distance paddled was 4.5 miles.

On the way home we detoured to the Nature Center and Mary pointed out for us a Snowy Owl amongst the dunes.

Photos from the trip are available here.
Posted by John Edward Harris at 9:26 PM