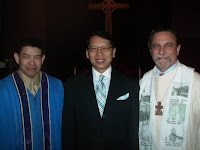 One of the blessings I enjoy as Pastor of North Church Queens is the opportunity to interact with the Thai Community Church of New York: Presbyterian Church (U.S.A.) which rents worship space from North Church. On Sunday, January 18, 2009 the Thai Community Church celebrated its 7th Anniversary. It held its first worship service on Sunday, January 6, 2002.

The Church’s Pastor, the Reverend Pongsak Sintumat (to the left in the photo), had invited me (to the right in the photo) to participate in the anniversary worship service by offering the Pastoral Prayer. After doing my best to offer a Thai welcome and congratulation I prayed in English. Worshippers welcomed my invitation to affirm the prayer with an audible “Amen”.

Helping to add to the festive atmosphere was the presence of the Royal Thai Consulate-General in New York Mr. Piriya Kemphon (center in the photo). Also present was New York City Presbytery’s liaison the Reverend Allen Thomson.

Worship was conducted mostly in Thai with a spattering of English. Music was a blend of traditional hymnody and praise choruses, some in Thai and some in English, accompanied by cassette tape, piano, electric guitar, and drum. Children, young adults, middle aged and elderly comprised the congregation. Leadership was shared by lay leaders and clergy.

Following worship we moved downstairs for a pot-luck Thai fellowship meal that rivaled any Thai restaurant. Mr. Kemphon cut an anniversary cake. Speeches were made. Gifts were given. Photographs from congregational events were projected onto a large screen.

Thais are known as happy, smiling people, and the Thai Community Church of New York is no exception. Their worship and fellowship exude joy. If I weren’t an American I might choose to be Thai.
Posted by John Edward Harris at 8:25 AM