My wife Vicki and I joined five other intrepid kayakers braving 37 degree water and 31 degree air temperatures, snow flurries, and an impending winter storm to kayak with harbor seals near Jones Beach State Park, NY this past Saturday. The trip was a Sebago Canoe Club trip organized and led by Tony and Walter. Other participants included Bonnie, Stevie and Jim. 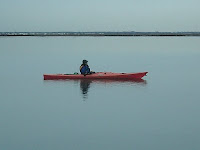 We were immediately encouraged that our trip would not be in vain when from the put-in we spotted a harbor seal even before a single boat was in the water. Once all seven kayakers were waterborne and further out unto glassy smooth South Oyster Bay we found ourselves among ten or more harbor seals. At times it seemed that the seals actually encircled us and eventually came in among our group. They did not seem at all bashful but were cautious. For awhile the seals followed us as we paddled, occasionally diving as they approached about ten yards from a boat only to surface another ten yards on the other side. 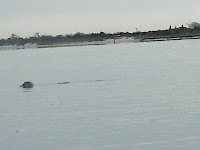 Harbor seal following my kayak
As we kayaked among the seals I heard kayaker exclamations such as “awesome”, “”amazing”, and “magical”. I found the convergence of clear, glassy smooth cold water; still and brisk air; snow flurries; impending winter storm, nearly silent experienced kayakers, and harbor seals a somewhat transcendent experience. Here we were, human powered watercraft inherited from the Eskimos paddling among wildlife which summers in the Arctic but winters in the bays along Long Island. At the time it seemed life could not get much better than this. 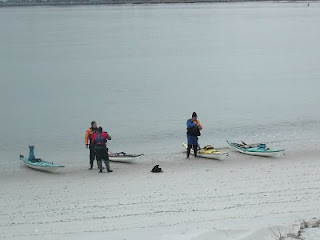 Breaking for a snack and a stretch 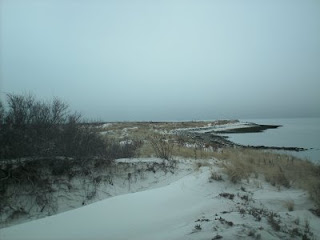 Looking out toward the Atlantic from Jones Beach Inlet
From a more technical aspect, we put in around 11:20 AM and paddled until around 2:40 PM. We paddled about 7.2 miles round trip, heading toward the west toward Jones Beach Inlet, where we beached for a short food and stretch break before heading back. While all paddlers were wearing dry suits and some sort of neoprene foot wear, it seemed that by the end of the trip almost all the paddlers were complaining of cold feet. 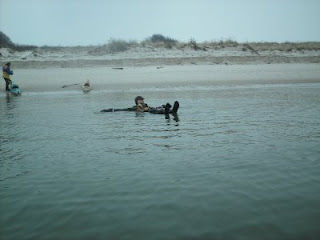