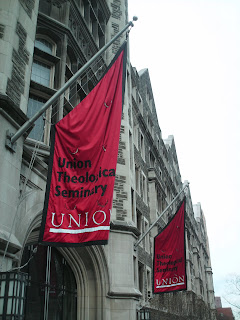 Entrance to Union Theolgical Seminary, New York City
If walls hold memories and proclaim their stories, the walls of James Chapel hold a wealth of history and recount significant events in American intellectual, religious, theological and cultural life. Within the Chapel’s walls luminaries of American Protestantism such as Reinhold Niebuhr, Paul Tillich (one of my favorite Theologians) and Henry Van Dusen lectured, worshiped and preached. Could those in attendance at the January 27, 2009 Stated Meeting of the Presbytery of New York City in any way compare? 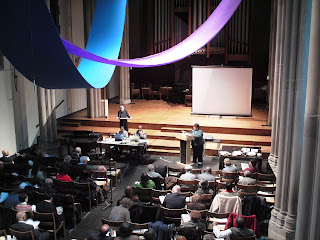 Presbytery of New York City Meeting
Among those addressing the regional governing body of the Presbyterian Church (U.S.A.) was the Reverend Dr. Serene Jones, the sixteenth president of Union Theological Seminary, and the first woman president in the Seminary's 172-year history. Dr. Jones spoke briefly on the contemporary significance of John Calvin and his theology, especially in light of 2009 being the 500 anniversary of his birth. In her comments, Dr. Jones noted the reemergence of classical Reformed theological themes traceable to Calvin during the most recent presidential campaign and inauguration, arguing that diverse voices such as Gene Robinson, Rick Warren, Joseph Lowery and Jeremiah Wright all owe a debt to Calvin. She also suggested that just as Calvin’s Geneva, swollen with immigrants, served as the center of Europe’s Reformation, contemporary New York City, also swollen with immigrants and their descendants, could become the center for an American Reformation. At least that is what I heard her say. Dr. Jones was not the only shining light present in the room. Also present was the Reverend Dr. Donald Shriver, Jr., a member of New York City Presbytery. He was president of Union Theological Seminary in New York from 1975 to 1991. The University of Louisville recently named Dr. Shriver as the winner of the 2009 Louisville Grawemeyer Award in Religion, one of the most prestigious awards in religious academia. Shriver was honored for his 2005 book Honest Patriots: Loving a County Enough to Remember Its Misdeeds (Oxford University Press). 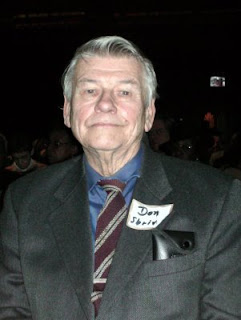 Dr. Donald Shiver, recipient of the 2009 Grawemeyer Award in Religion

Dr. Shiver and I both served small PC(USA) congregations in Gastonia, NC, though not during the same period. I first became aware of him while I was serving in Gastonia from 1986-1989 and learned of Spindles and Spires: A Re-Study of Religion and Social Change in Gastonia, which he co-authored with Dean D. Knudsen and John R. Earle in 1976. The “re-study” in the title is a reference to the fact that the book updates Liston Pope’s 1965 classic Millhands and Preachers: A Study of Gastonia.

Maybe some of those in attendance at the January 27, 2009 Stated Meeting of the Presbytery of New York City in some way compared. Time will tell. History will judge. Hallowed walls may indeed remember.

More of my photographs from the meeting can be viewed here.

Posted by John Edward Harris at 9:08 AM