What could be better on a cold winter’s day then to take a kayak into a pool and practice wet exits, bracing, self rescues and rolling, provided of course that pool is an inside Olympic sized pool with 80 degree water temperature? For the second winter in a row since the pool opened on February 29, 2008, the Sebago Canoe Club is sponsoring kayak pool sessions at the Flushing Meadows Corona Park Aquatic Center. The pool was built with the expectation that it would host water polo competition for the 2012 Olympic Games but London beat out New York as the host. Flushing Meadows Corona Park was home to the 1939/1940 New York World’s Fair as well as the 1964/1965 World’s Fair. Practicing kayaking skills in such a venue adds to the experience. 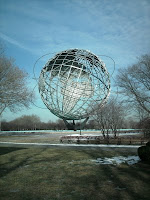 The Unisphere at Flushing Meadows Corona Park
I went to my first pool session intending to practice wet exits, to learn self rescues, and wearing mask and snorkel to take some underwater photographs of others practicing their skills. I had performed a wet exit before but wanted more practice. Wearing a spray skirt, a wet exit entails capsizing upside down into the water, pulling the spray skirt of the cockpit combing, slipping out of the kayak, and surfacing next to the kayak, paddle in hand. 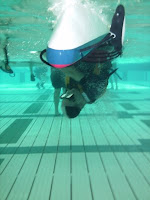 I had never before performed a self rescue so I worked on the technique first using a paddle float and then without using a paddle float. A self rescue is the techniques a paddler uses to get oneself back into the kayak after a wet exit. An inflatable or Styrofoam float is usually attached to one of the paddle blades. The paddle is then used as an outrigger to steady the kayak so that the paddler can re-enter the boat from deep water. I mastered the technique in one try and performed several more from both side of the kayak for practice. 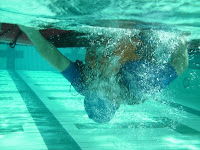 A self rescue without a paddle float is a little trickier than one with a float, even with a steady boat, and next to impossible with a tippy boat. Thankfully the kayak I was paddling was pretty steady and so I was able to also master self rescues without using a paddle float. 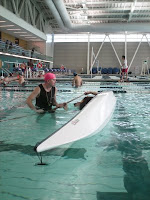 I spent the rest of my first pool session trying to learn how to roll. A roll is when a kayaker capsizes upside down into the water and rather than wet exiting combines paddle, boat and body movements to roll the kayak and oneself back into an upright position. I worked on the technique for about thirty minutes during my first pool session but even with some help and coaching from Pete was not able to successfully roll. 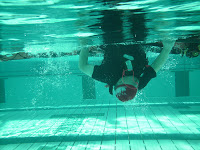 I went to my second pool session intending to learn how to roll and to take some more underwater photographs. After warming up by practicing bracing and hip flicks I was ready to try to learn how to roll. Practicing in an Impex Montauk and using a wooden Greenland style paddle, I was once again patiently coached and assisted by Pete. My technique seemed to have improved since the previous session but I was still having a problem putting it all together. After about an hour I was ready for a break. I wet exited, took of my life vest, put on mask and snorkel, and photographed others practicing their skills. 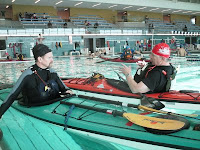 With about twenty minutes left in our pool time, I asked Phil if I could practice in his Necky Chatam. A couple times I had paddled a polymer Chatam owned by the club and really liked it. Phil’s Chatam was a composite but the same design. I had discovered previously that when I paddle a boat after Phil that I do not have to adjust the foot braces, as we are about the same size, so I was able to quickly slip into Phil's Chatam. 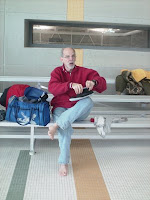 Practicing in Phil’s kayak and once again using a Greenland style paddle, I was coached and assisted by Stevie. Since the Chatam fit better than the Montauk the practice seemed a little more fruitful. Stevie at first had me practicing a sculling brace with my shoulder, head and right arm in the water. Eventually I would practice capsizing and try to move into the sculling position. On one attempt, without thinking about it or realizing it, I rolled upright! I had executed a roll without intending to! Does that count as a success? Unfortunately I was not able to repeat the maneuver during the time remaining.

Will my third pool session be a charm?

Posted by John Edward Harris at 8:03 AM