The More Things Change – The More They Stay the Same 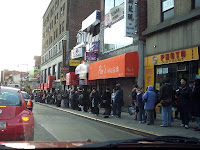 I recently relocated to the New York City borough of Queens after nineteen years of ministry in West Virginia. West Virginia, with a population of 1.8 million, 94.9% white, is the fourth least ethnically diverse state in the country. Only Vermont, Maine, and New Hampshire are whiter. As an example of this lack of ethnic diversity, the touch screen ATM at my former bank in West Virginia offered two languages, English and Spanish.

Queen’s County, with a population of 2.3 million, has long been listed by demographers as the most ethnically diverse county in the United States. 31.3% of Queens’s population is white, 20.9 is Black, 26.5 is Hispanic, and 21.3 is Asian. 46.13% of the Queens population is foreign born. 53.64% of the Queens population speaks a language other than English. The touch screen ATM at my Queens neighborhood bank illustrates this diversity. It offers ten languages; English, Spanish, Japanese, Korean, French, Italian, Russian, Greek, Portuguese and Polish. The Chinese restaurant around the corner from our home offers its menu in English and Polish. The Roman Catholic Church in the neighborhood offers Mass in English and Italian. My wife’s church, in whose manse we live, rents its worship space to a Romanian Orthodox Church, most of whose members speak very little English. This extraordinary breadth of diversity in the racial, religious, and nationality backgrounds of Queens provides an exciting environment in which to work and worship.

In West Virginia I served four small churches ranging in size from 46 to 160 members and in two different presbyteries over nineteen years. My shortest service was a 13 month Interim. My longest was a ten year pastorate. From all those churches, consisting of over four hundred members, I can recall one member born in Spain, one in France, and one in England. As far as I knew, all the rest had been born in the United States. Many were from families that had been in the United States and in West Virginia for generations.

In the 38 member Queens church I now serve as half-time designated pastor; one member was born in Spain, and two in the Philippines. Our one member born in England recently died. Of the non members regularly or occasionally worshiping with us, one was born in Russia, one in Italy, and one in the Philippines. Many of the American born members and other worshippers are first or second generation Americans, their parents or grandparents having emigrated from various European and Pacific Rim countries. In addition to our own ethnic diversity, we lease worship space to a Korean speaking congregation and a developing Thai speaking Fellowship.

New York City Presbytery has no racial ethnic majority. While Whites are the most numerous, whites make up less than half the presbytery’s membership. Many of the presbytery’s churches are ethnically diverse. Congregations worship in Éwé, French, Urdu, Hindi-Punjabi, Korean, Arabic and Thai (just to name a few) in addition to English.

By most comparisons, ministry in a small church in Queens ought to be extremely contextually different than ministry in a small church in West Virginia. Surprisingly, however, there are many similarities. Small churches in both Queens as well as West Virginia face financial, membership and staffing challenges. Membership in both contexts is generally growing older. Sharing the good news of the Gospel with a younger generation is a primary challenge. Members in both contexts become ill, are hospitalized, and need visited. Sermons, session meetings, and special services demand a pastor’s attention in both settings. Because of the limited number of people available in a small church to attend to the “necessary” tasks, active members often balance numerous church responsibilities and are overloaded and overworked, which leads to burnout.

Yep! I noticed the similarities of small church ministry despite the contextual differences. I have found so far that the attitude of openness to try new things is more prevalent here in NYC.