The Last Paddle of Summer 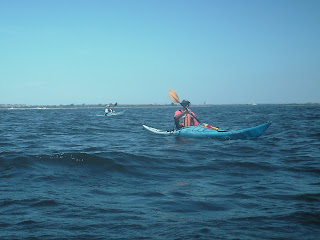 I know the fall equinox does not occur until September 21, but for many people, Labor Day marks the official end of summer. In which case, the Sebago Canoe Club’s Labor Day Paddle to Gerritsen Creek and back was the last paddle of summer. What a paddle it was. Here is how Phil, the trip leader, announced it.

The ability to do a wet exit, must do group rescues and boat handling skills plus you have paddled on minimum10 mile trips. Low tide is 12:45 and High Tide is 7:00pm so we will get an assist on the way back

The trip is appox 6 hours. Gerritsen Greek has been home both to a bayside community of fishermen and dumping grounds for old boats. Now cleaned up and revitalized, its scenery is stunning and includes a new interpretive nature center. But don’t worry, it’s not sanitized, you can still take in a few hulks of rusting wrecks while gazing at egrets.

Twenty of us assembled for the paddle and were on the water shortly after noon. The sky was blue with just a few billowy clouds. Both the air and the water were warm. There was a slight breeze. The tide was going out, which was in our favor. In other words, it was a nearly perfect day to paddle.

I paddled, for my first time, one of three demo Necky Elaho’s recently purchased by the club. The particular Elhao I paddled was red, poly roto-molded, with a skeg rather than a rudder. I did not use the skeg as the boat tended to track well. I like the feel of Necky’s and this boat could easily become my second favorite, close behind the Chatham.

According to my GPS, we paddled 13.8 miles round trip, but I and two other paddlers detoured into a salt marsh on the way home, which may have added an extra half-mile or so to my total paddle.

About a mile into the paddle one of our group decided the wind was too much and headed back to the dock, reducing our number to nineteen.

The most demanding part of our trip was just after the Marine Parkway Bridge when we turned north into Dead Horse Bay. The wind, tide and shallows combined to produce a nice chop. Since the day and the water were warm I paddled into the midst of the chop, eventfully paddled on my starboard when I should have braced on my port, and over I went. Roger offered to rescue me but we opted to head toward shallower water where I could stand in water a little higher than waste deep and with a nice hop up and across the deck of my boat and grabbing onto Roger’s boat I quickly reentered my cockpit and was paddling once again.

Once at Gerritsen we beached around 2:45 PM and enjoyed whatever lunch we brought or others shared. The water was so thick with power boaters and jet skiers that we opted not to paddle around the island in the middle of the Creek. To make matters worse, ATVs and dirt bikes were on the beach and one ATV even cut across our beaching site, coming within inches of some of us, as he crossed from one side of the beach to the other side.

About half an hour later, we headed back toward Sebago. While the wind and chop made re-crossing Dead Horse Bay a bit tricky, once we were out of the Bay we generally had the wind at our back and were paddling on a flood tide for a nice assist.

Because I chose to detour into a salt march on the way back, I was one of the last paddlers to reach the Sebago Dock, almost exactly at 6:00 P.M. By the time I reached the dock, my water was almost gone. My arm and shoulder muscles were sore and my legs were stiff. While this was not my longest paddle, nor was it the first time I had paddled to Gerritsen Beach and back, tt was only my second paddle to Gerristsen, my third longest paddle ever, and my longest paddle in over a year. At the end of the day and trip, however, I was humbled when one of our oldest members, 85 year Betty, Sebago PGD #1, paddled up to the dock. I hope to be paddling at her level of skill and competence thirty years from now.

While this Labor Day paddle was a great one, I experienced a little sadness as we were washing and stowing gear in the setting sun because I realized that Sebago’s summer paddling season had officially ended. While there will certainly be some fall paddles before dry suit conditions set in, there is something special about Summer paddles, with their warm air and water temperatures, and late evenings.

I have posted photos from the trip on my Picasa site.
Posted by John Edward Harris at 7:01 PM