Alert issued 9/16/10 at 5:40 PM The National Weather Service has issued a Tornado Warning until 6PM in Queens. Immediately go indoors and/or to the lowest floor of your building for shelter. Stay away from windows. 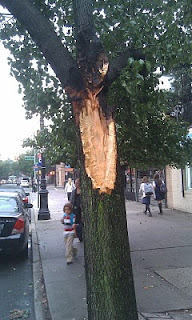 My home computer received the above e-mail soon after it was issued. The problem was I was not home. I was riding the “M” line into Manhattan. My smart phone acknowledged an incoming call from NotifyNYC that would have audibly delivered the same information, but the call was dropped before my phone received the message.
Later this afternoon, investigators from the National Weather Service will determine if a tornado, or more than one tornado, actually touched down in the city.

When I left the house yesterday a little after 5 PM to head into Manhattan to meet my wife for dinner, there was an overcast sky with a low cloud ceiling but no wind or rain. I knew the weather forecast included a chance of thunderstorms but I had no idea what was in store.

By the time I arrived at the elevated “M” platform on Forest Avenue, ¼ mile from home, I could hear thunder in the distance.

Between the Forest Avenue Station and the Williamsburg Bridge, I started seeing numerous cloud to ground lightning strikes over Manhattan and to the north. Then the rain started, heavy rain, wind-driven blowing sideways rain, accompanied by pea-sized hail. The sky had become so dark and the rain was blowing so hard that I could no longer see outside the windows of the subway car. 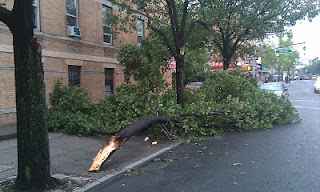 During the height of the storm my smart phone rang, identifying the call being from NotifyNYC, a free subscription based emergency broadcast service provided by the city. As I listened to the first few words of the message, I lost the connection. I could hear the phones of other passengers in the car starting to ring. Even though I lost the NotifyNYC call I still had connectivity, so I switched to my smart phone’s browser and connected to Weather Underground. A weather alert warning about possible tornadoes appeared at the top of the screen. But the storm was already winding down.
By the time we crossed the Williamsburg Bridge, the rain had almost stopped. Low clouds were covering the higher buildings in Upper Manhattan and climbing to the northwest.
When I exited the subway at Rockefeller Center, there was little indication that a torrential storm had passed. I arrived at the restaurant before my wife and when she arrived, she had no idea there had even been a storm. As we enjoyed our dinner, however, NY 1, the local news station, played on a nearby wall mounted flat screen. Images of storm damage started appearing on the screen. Although we could not hear the commentary, we could read the text and the text suggested the worst of the damage was in Staten Island and Queens.
After dinner we did a little shopping before heading home. We walked to the “M” but four “F” trains passed before an “M” arrived. After we passed a couple of stations, the conductor announced that the train would be stopping at West 4th street in Manhattan. As we transferred to the “J” we learned that the “M” service in Brooklyn and Queens had been suspended because of debris on the tracks. We rode the “J” to Myrtle-Broadway where we transferred to the Q-54 bus. We intended to transfer to the Q-55 at Myrtle-Wyckoff but after waiting several minutes decided to walk home. Several east bound out of service busses passed by as we were walking but by the time we arrived at our front door, not a single eastbound Q-55 had passed by. Deciding to walk rather than wait for the bus had been the right decision.
Once home, we made a quick survey of the house, inside and out, and determined that all was well.  This morning, however, I dsicovered that a four fot long branch with a trunk diameter of an inch or two fell from the tree in our back yard into our back yard, but that is nothing compared to what I saw as I walked the dog.

AsI was walking Myrrhlyn this morning, I was struck by the stark contrast between the number of downed trees and broken limbs on Fresh Pond Road, especially near the “M” station, compared to apparent lack of downed tree and scan fallen branches along the other three streets we walked. At one point along our walk, I had to detour out into the street because a large broken and fallen branch blocked the entire sidewalk (photos above right).

A little over three years ago, soon after we moved to New York, a tornado touched down in Brooklyn. Like many other New Yorkers, I am waiting to find out if last night one touched down in Queens.
Posted by John Edward Harris at 9:12 AM