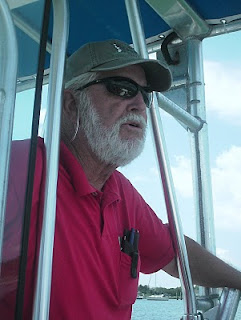 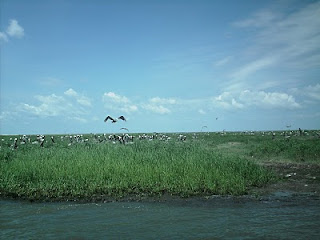 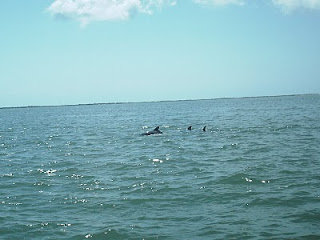 Though my wife and I have been vacationing on Ocracoke for years, it was not until our most recent vacation that we ventured south across the channel to visit Portsmouth island. A day or two prior to the day we desired to visit Portsmouth Island I phoned Austin Boat Tours to reserve passage for us and our dog. The morning of our trip we gathered with other passengers on the small dock along the edge of Ocracoke’s Silver Lake and near the Community Store. Capt Rudy Austin (photo top left) talked to us about the importance of having water, suntan lotion, and insect repellent. After the talk, we were off, heading for Portsmouth Island. Captain Rudy did not even want to be paid in advance, saying that anyone that would not or did not pay on the return trip would not be returned, being marooned on Portsmouth Island. According to the Captain, every passenger he has ferried to Portsmouth Island has always paid to returned to Ocracoke. 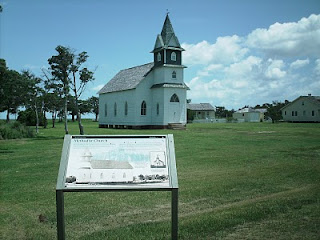 Captain Rudy not only piloted the small flat bottom ferry but also served as a tour guide, offering up a running commentary on local flora and fauna, fish, history, and politics. While crossing the channel we saw several pods of dolphins (photo top right), some swimming close enough to the boat a passenger could almost reach out and touch them. As we approached closer to Portsmouth Island we passed by a smaller Island thick with waterfowl, including gulls and pelicans, including several young chicks (photo second from top right). Thanks to the Captain’s commentary, the natural encounters, and the overall scenic beauty and open water, the trip would have been worth it even if we had never stopped at Portsmouth Island. 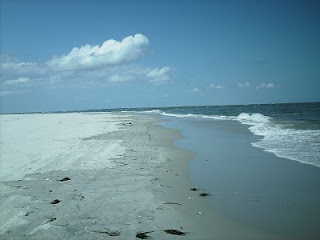 We did stop at Portsmouth Island, however, docking at a long wooden pier on the western side (sound side) of the island just long enough for passengers to disembark. As the last one of us climbed off the boat, Captain Rudy pulled away, heading back for Ocracoke, saying he would pick us up on the northern end of the beach in about three hours.
Eventually we found our way into the old and now abandoned village of Portsmouth and, eventually, the mosquitoes and biting flies found us.
While we took our time visiting and photographing the old Methodist Church (photo third from top right), we refrained from visiting very long at any of the other buildings because of the biting insects and briskly walked through town in order to make it the ocean side beach before the mosquitoes sucked us dry and the biting flies euthanized our dog.
After crossing a long dry tidal mud flat, we made our way to one of the widest, cleanest and most deserted beaches I have ever seen (bottom photo right). While standing there, enjoying both the view and the isolation, including the absence of any biting insects, I wondered why we had not come here years ago. We spread out our towels, played in the water, enjoyed our lunch, and looked for shells.
Not to miss our boat ride back to Ocracoke, we finally started walking north along the beach as we headed for the rendezvous sooner than we would have liked to. We had been enjoying our idyllic beach so much that we could have stayed there much longer.
At the northern end of the beach, with the Ocracoke water tower visible in the distance, we waded out to Captain Rudy in the flat-bottomed ferry and headed back toward Ocracoke.
Now that I have been to Portsmouth and know what to expect, I hope that the next time I visit it I will paddle my own kayak there rather than taking a passenger ferry.
Posted by John Edward Harris at 8:22 AM