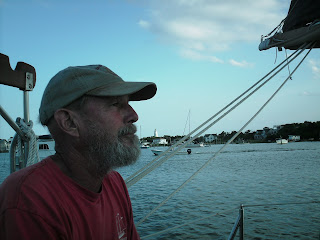 My wife and I celebrated our anniversary during our recent vacation on Ocracoke. One of the ways we celebrated was by taking a Sunset Sail aboard the Windfall II (photo bottom right, over starboard, while sailing)

A few years ago, for no special occasion or reason other than sheer enjoyment, we had taken a Sunset Sail aboard the Windfall. A few months before our most recent Ocracoke vacation, and after over twenty-five years of service, however, the Windfall’s owner, Captain Rob Temple (photo top right), decommissioned the Windfall and purchased the Windfall II.

The Windfall II, a 32' Lazy Jack Schooner, does not hold as many people as the Windfall used to but she is still a fine ship, and Rob, assisted by his first mate son Emmet, provided us with a safe and entertaining sail. While Emmitt impressed me as a well mannered and intelligent fifteen year old with ample sailing experience, Rob displays a little more sea salt that comes from his being a middle aged man of the sea. With a little imagination, one might even hear a bit of a buccaneer in Rob’s voice as he occasionally talks about local history and pirate lore, especially when he points out the general vicinity where the Pirate Blackbeard lost his head after a battle with Lieutenant Robert Maynard.

In addition to Captain Rob and his son Emmet, there were six paying passengers on the sail. After we were all on board, the wind allowed Rob and Emmitt to raise the sails and sail us out of dock and the harbor into the open channel between the Atlantic Ocean and Pamlico Sound without the aid of the inboard motor.
After we had been sailing in the channel for a while, Rob asked if any of the six paying passengers would like to take the helm. I jumped at the chance. Standing behind the large wheel and following Rob’s instructions, he and his son continued to work the sheets while I steered the course directed by Rob. He even let me stay at the helm as we passed a North Carolina Department of Highways ferry on our port side. I found the hardest part of steering was being able to see the unlit day markers against the darkening sky. More than once Rob had to point them out to me so that I could stay in the channel. 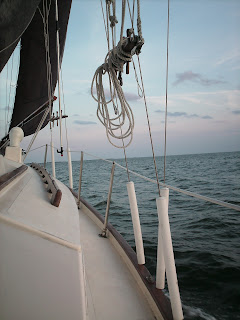 Not wanting to hog the wheel, I asked if any other passengers wanted to try their hand at the helm. Since there no takers I stayed where I was and steered the ship for probably twenty minutes, and through several tacks, before Rob finally relieved me. I was glad he did relieve me because the sun was just about to set and I would not have been able to take any pictures while I was at the helm and I wanted to take a lot of pictures. Nor would my wife and I have been able to uncork and enjoy the bottle of red wine we had brought along to enjoy as we sailed.
As far as I know, the Windfall II is the only Sailboat docked in Silver Lake (the name of Ocracoke’s small harbor) that offers sailing cruises and that is available for charter. She will not sail if the wind or the water is too heavy. If the wind is light, she always has her motor.