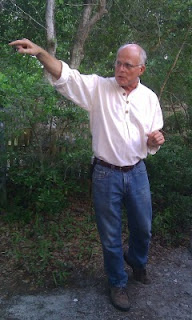 Prior to attending and blogging about the 219th Presbyterian Church (U.S.A.) General Assembly, I had been writing about my family’s recent vacation on Ocracoke Island, NC. With a few kayaking posts as a buffer following all my reflections about the General Assembly, I now return to Ocracoke. I wish I could return physically to that Isle rather than just returning to it as a subject matter for blog posts because it is one of my favorite vacation spots.
My wife and I have been enjoying Ocracoke for decades. We have stayed on the island during all the seasons of the year, from a few days to a week, but our most recent trip there was our longest, a twelve-day stay. I find it amazing that even though we have been vacationing on Ocracoke for close to thirty years, we still find new things to do and experience when we go there. Perhaps that is partly why we keep returning.
For instance, this last stay we enjoyed an evening Ghost and History Walk led by the village businessperson and amateur local historian Phillip (Phil) Howard (photo top right). When we arrived outside his shop, The Village Craftsman, for that evening’s Ghost Walk, so many people had shown up for the walk that Phil divided the group in half. While Phil’s daughter led half of the group on a Ghost Walk of one side of the village, Phil led our half of the group on a Ghost Walk of the other side.
Our tour embarked around dusk, adding a liminal element to the setting. Fortunately, the mosquitoes were not in abundance, but if they had been, we had properly armed ourselves with repellent as well as long pants and long sleeves, in spite of the warm weather. While leading us along the winding and dusty back roads, overgrown paths, and quiet paved streets of the village, Phil pointed out various features, such as old historic trees, historic homes, and perhaps more importantly, cemeteries, while telling ghostly stories related to each.

The stories Phil related were not scary in and of themselves. No one jumped out from behind bushes. No one deployed or employed special props. No, this was not an amusement park haunted house sort of experience. Rather, Phil told stories recalling supposedly past hauntings, paranormal activity, and eerie experiences. Most of his stories involved former residents of Ocracoke, now long departed. Some stories called upon local seafaring history, including shipwrecks, deaths at sea, and ghost ships. It seemed that all his stories, well told with little dramatic flair, he based on a kernel of local historical fact. With a little embellishment, and the addition of the listener’s imagination, Phil’s tales suggested there was more to Ocracoke island and the village by the same name than one might expect—ghostly things.

The prevalence of small family cemeteries spread throughout the village, some of them included on the walk and containing the graves of Phil’s ancestors, added an ethereal element to the already liminal setting. I cannot say that I was ever scared during, or after the tour, but I was entertained and educated. Phil is a great storyteller and weaver of local yarns, and I am glad I went on the tour. In fact, I want to go again, either to experience the tour led by his daughter, or to tour the other side of the village.

Though I have not yet read it, Phil recently published a collection of Ghostly tails, Digging Up Uncle Evans: History, Ghost Tales, & Stories From Ocracoke Island, that I look forward to reading. I imagine, however, even though I will be able to hear Phil’s voice as I read those tales, reading them while sitting on the couch at home will not be the same as hearing Phil tell them while meandering down a winding and dusty road at dusk as that road passes by an old cemetery.
Posted by John Edward Harris at 6:41 PM

Email ThisBlogThis!Share to TwitterShare to FacebookShare to Pinterest
Labels: Ocracoke

I go to college in Gettysburg, Pennsylvania, where there are ghost tours running every night and ghost stories about practically every old building on campus.

It's fun walking past ghost tours at night, watching as those in the group listen intently to the guide as he repeats stories that have been passed down for generations since the Civil War Era...

I have yet to actually go on a ghost tour myself, but I hope to before I graduate!

Hi Liz. I am glad you have recovered from GA and that you left a comment. I imagine there might be more ghosts than ghost stories in Gettysburg. I think going on a ghost tour of Gettysburg ought to be a graduation requirement at Gettysburg College.

John, Thank you for the kind words about our ghost tours. Please stop by and chat sometime when you are on the island.

I read a little bit on your blog, and think we'd have a lot to talk about. I attended Lutheran Theological Seminary at Gettysburg...but have moved quite a philosophical distance away. If you'd be interested in some of my own ruminations about religion and ghosts, send me an email at piphoward at embarqmail dot com.