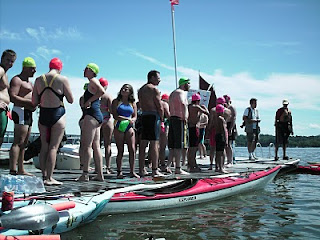 My wife and I have been kayaking for over nine years. The first seven of those years were on sit-on-tops. The last two years have been a mix of paddling sit-on-tops and closed cockpit sea kayaks.

In our nine plus years of paddling, last Saturday was the first time we paddled to provide swimmer support. The occasion was the 7th Annual Hudson River Swim, a one mile swim from Newburg, NY to Beacon NY.

Saturday’s paddle was only the second time we have ever paddled on the Hudson. Our only other previous time on the river was a few years ago, a short paddle around Kingston. My wife paddled, for the first time, a used Current Designs Sirocco. She was test paddling the Sirocco because she was considering buying it. She ended up purchasing it later that day and we brought the boat home with us.

I paddled a Perception Prodigy 12 recreational kayak provided by Mountain Tops Outdoors, a local Beacon, NY Outfitter that provided their rentals free. While I found the Prodigy 12 cockpit a little large and cumbersome, at least my butt stayed dry, which it would not have if I had paddled my own sit-on-top. Mountain Tops also provided PFDs and paddles but I opted to use my own.

We had originally registered on-line to provide swimmer support. The morning of the swim, we reported to the registration table, our preregistered names we checked off, we were given a bottle of water, a Cliff Bar, and loaned a whistle and a foam noodle. A dock master supervised our getting into the water and then about a dozen kayakers paddled from Beacon across the Hudson to Newburgh where we waited for the one mile swim to begin. By the time the swim began, about a hundred kayaks were in the water to provide support.

I was impressed with organization as local police, sheriff, Coast Guard, and Coast Guard Auxiliary we also on hand to provide support. The river was even closed to all other traffic as along as swimmers were in the water.

Around 11:30 AM, about 250 swimmers entered the water (photo top right). I ended up paddling backwards in front of the swimmers on the downstream (southern) side and in front of the pack. I paddled backwards so that I could keep my eye on the half dozen to dozen swimmers near the front of the pack. As we approached Beacon I finally turned around and stayed close to who I believe was the third swimmer to complete the swim. I then backed off from the Beacon Dock and paddled to what I thought to be holes in the swimmer support coverage.

At first swimmers straggled in. Then more and more swimmers started approaching in groups, until about an hour after the swim began, all swimmers were present and accounted for on dry land. Earlier in the day I saw at least one swimmer hanging on an upstream kayak for support and another swimmer being brought in as a passenger on a jet ski.

There were several highlights during the day. The first was listening to Pete Seeger singing near the Newburgh Waterfront while I was sitting in my kayak and waiting for the swim to begin. The second was seeing and paddling in the presence of the The Sloop Woody Guthrie, which I had known nothing about prior to the day, in spite o my being a first year member of the Clearwater Foundation. The third came after the swim was over and I was out of the water. While walking around the Beacon waterfront, as we were enjoying humus, pita bread and watermelon, we encountered Pete Seeger talking to and strumming his banjo for a group of about eight to ten listeners.

The last time we saw and heard Pete perform was at his 90th birthday party in Madison Square Garden.  We were seated way up in the nosebleed section for that event, but last Saturday in Beacon we were standing about three to four feet away.

Photos from the day can be viewed on my Picasa page.
Posted by John Edward Harris at 4:33 PM