There were three different stages, the Live Oaks Stage, Howard Street Stage, and Deepwater Theater, with almost continuous entertainment from 9:00 AM through 6:00 PM on the Saturday of the eleventh annual Ocrafolk Festival. At times there were performers on all three stages, forcing one to make a choice about which performer to watch. At other times only one stage was active. But all day long, between the stages, local artisans and civic groups were selling their wares. My wife, I and our dog opted to spend most of our time at the Howard St. Stage, where locals John Golden and Captain Ron Temple were hosts, that is when we were not checking out the artisans. 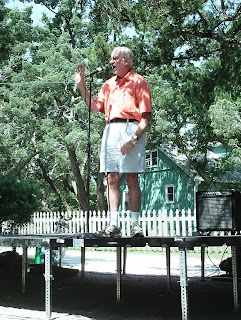 The first act I wanted to catch, and did, was storyteller Donald Davis (photo top right). A retired United Methodist Minister, Davis has written several books and recorded several CD’s of folk stories. Several years ago I bought two of his books, Telling Your Own Stories, and Listening for the Crack of Dawn. I also purchased a cassette recording of Donald reading Listening for the Crack of Dawn. It was not until we attended this festival, however, that I saw and heard him tell some of his stories. Doing so was a treat. Later in the day I purchased yet another of his books, Writing as a Second Language.bought another book he had authored.
The next act we caught was The Honey Dewdrops, musicians that appeared on A Prairie Home Companion  (one of my favorite live radio shows, having been to a few live performances) in March 2008 when they won first place in the APHC “People in their Twenties Talent Show”. They were also selected as finalists in the 2009 Mountain Stage (another of my favorite live radio shows, having attended more live performances than I can remember) New Song Competition. In spite of such accolades, however, The Honey Dewdrops would not be our favorite musicians at the Ocrafolk Festival. 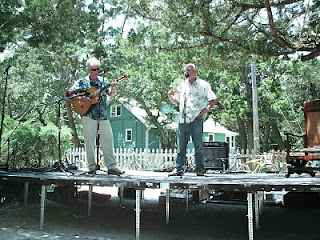 Before we heard the musicians who would become our favorites, I was treated to “Shipwreck Stories” presented by Philip Howard and John Golden. (photo middle right) John is local musician. Phil is a local entrepreneur who owns The Village Craftsman, a story teller, and keeper of local lore and history. Phil told stories related to shipwrecks around Ocracoke while John accompanied Phil with original songs on guitar, songs about the ships and their passengers and crew that Phil was telling stories about.

John and Phil's presentation seemed well rehearsed and almost seamless. It was educational as well as entertaining with both John and Phil showing their pride for Ocracoke and its people of the past.  Phil, especially, passionately recounted stories related to the old United States Lifesaving Service, a precursor of the United States Coast Guard. 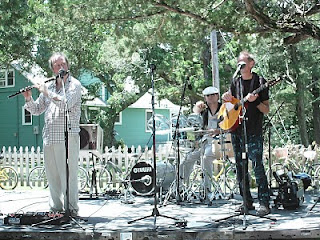 The musicians who would become our favorite of the festival appeared after John and Phil had finished. When we read that one of the many musical genres Craicdown (photo bottom right)drew upon was the jigs and reels of the Celtic cultures, we knew we wanted to hear them perform. Even though the Honey Dewdrops had been selected as finalists in the 2009 Mountain Stage New Song Competition, I think Craicdown would also have been deserving of the title. The problem is, they have never appeared on Mountain Stage, but they should. With their Celtic roots and sound they should also be featured on Fiona Ritchie’s Thistle and Shamrock.
We liked Craicdown so much that as soon as they finished their set we rushed over to the Festival Information Table to be the first to buy their hot of the press first CD, Roads, and then hung around to talk with band members David DiGiuseppe, Rob Sharer, and Jim Roberts and have them autograph their CD, which they gladly did.
My favorite tracks on Roads are "No Rewards" and "Up In the Air", both written by Rob Shaw. About the subjugation of Indigenous Americans by European settlers,  "No Rewards" begins like a Celtic/Irish folk tale but soon picks up tempo to display Cajun influences.  Also displaying some Cajun influences, "Up in the Air" focus on the triumph over prejudice toward Irish immigrants in 1851 New York City, Racism and Segregation in Birmingham, Alabama in 1963, and illegal Mexican immigrants in Yuma, Arizona in 2006.  My favorite lines from "Up In the Air"could serve as an anthem of the human spirit.

There were many other musicians and performers on Howard St. Stage and the other two stages that we did not see or hear, so do not take my lack of mention of them as a slight. We simply did not have the time to enjoy every performer.
By the way, this was all free! The only cost to us was the hot sun, dusty roads and a few mosquitoes. Thanks to fundraising, donations, and lots of volunteer help, the Ocrafolk Festival is free to the public. There were no tickets or wrist bands or badges. We were free to come and go with our dog as we pleased. We could not always find a seat, but there was always plenty of standing room.
But wait. There is more. I have written only about Saturday during the daylight hours. I have yet written about Saturday evening’s performances in the Deepwater Theater. That will be in another post.
Posted by John Edward Harris at 10:57 AM

Thanks for your kind words about Craicdown - We really appreciate it~!
A few things - the writer for those tunes is Rob Sharer. "Up in the Air" also has a reggae feel to it. Lastly, we now have it available online at http://www.cdbaby.com/cd/craicdown .
Come by and listen to a sample if you haven't heard it. Folks can visit our site at Craicdown.com (pronounced Crack~down). Thanks again~!