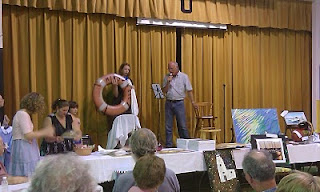 When my wife and I were planning our recent vacation on the Island of Ocracoke, NC, we had no idea that the 11th Annual Ocrafolk Festival would be taking place the only full weekend we would be there. It was a serendipitous pleasant surprise when soon after we arrived at Ocracoke on Sunday, May 30th we learned about the free community celebration that was scheduled to begin the following Friday, June 4th.

We have been vacationing on Ocracoke since the late 1980’s but have never been on the Island during the festival, which started in 1999. I knew there was a weeklong Ocrafolk School in October but was not even aware that there was an Ocrafolk Festival.

While camping in the National Park Service Campground a couple miles north of the village of Ocracoke we had been driving into the village in the evenings to eat dinner at one of the many fine restaurants. But on Friday, June 4, we ate at the Ocrafolk Festival Pot-Luck, held in the Ocracoke School Gym, home of the Ocracoke Dolphins, the moniker of both the boys and girls high school basketball teams. Since preparing a main dish in the campground would have been difficult, we opted to make a donation for a main dish provided by one of the many local restaurants so that we could attend. We are glad we did.

I have attended many church pot luck dinners but none of them as big as the pot luck at the Ocrafolk Festival. Several hundred people must have been present for the dinner in the gym and the two rows of food tables at the end of the basketball court, with a couple of tables off to the side, could barely hold the potpourri of both homemade and restaurant made appetizers, main dishes, side dishes, salads and desserts. Both my wife and I enjoyed all we could eat. As the dinner was winding down there was still some food available and people were going back for seconds and thirds.

After the dinner there was the Ocrafolk Festival Live Fundraising Auction, which we stayed for. Local resident Philip Howard served as auctioneer and young women from Ocracoke’s Girl Scout Troop helped display the more than three dozen items to be auctioned, featuring items in a way that would rival Vanna White.

I bid on a few items, including the Life Ring from the Schooner Windfall  (photo top right), but had set a forty dollar limit for myself and was outbid every time. Some of the items I had bid on sold for over a hundred dollars. The last item to be auctioned off was an Ocrafolk Festival Quilt that ultimately sold for a little less than a thousand dollars after two local matriarchs engaged in a bidding war to claim the one of a kind prize. Even though I could not claim a single winning bid I thoroughly enjoyed the auction as some of the items being auctioned were accompanied by interesting comments and stories, and Phil Howard was an entertaining auctioneer.

Even though the Green Grass Cloggers were scheduled to perform in the School Gym following the auction, my wife and I chose to call it an evening when the auction concluded. After all, we were sleeping a couple miles away in a tent and had become used to going to bed soon after the sun set. Nevertheless, we had a thoroughly enjoyable evening and were glad we decided to opt for pot luck rather than eating dinner in a restaurant.
Posted by John Edward Harris at 7:53 AM