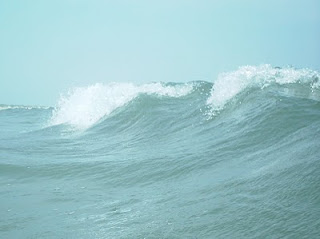 My reading tastes and habits are a bit odd. I generally read for information and inspiration rather than entertainment even when I am reading for pleasure. I am more inclined to read non-fiction than fiction and usually opt for theology, philosophy, the theory and practice of ministry, or an instructional book or trip narrative related to climbing or kayaking. For instance, many people, even most people, might pack a few novels to read on the beach when they are on vacation. I did not. While enjoying a two week beach vacation I finished reading one book that I had started before leaving for our vacation. I read a second book cover to cover while I was at the shore, and I started a third book before leaving the beach for home, none of them novels.

According to Wikipedia, Rachel Carson's The Sea Around Us won both the 1952 National Book Award in nonfiction and a Burroughs Medal in nature writing. What book would make a better read while camping in a National Seashore just a dune’s walk away from the ocean along the Mid-Atlantic Coast than this award winning classic? Carson’s occasional references to Cape Hatteras and the Gulf Stream made the reading even more enjoyable since our campsite was just a few miles south of Cape Hatteras and in the Cape Hatteras National Seashore, and fishing charter boats left daily for the Gulf Stream from Ocracoke’s nearby docks.

I read Rachel Carson’s Silent Spring back when I was still in high school, many years ago, before "Global Climate Change" or "The Exxon Valdez" became part of our environmental lexicon. I was reading a lot of nature and environmental literature back then, including numerous writings by John Muir and Henry David Thoreau’s Walden. Silent Spring was part of that mix and a significant contributor of my growing environmental consciousness. Why I waited over thirty-five years and for a beach vacation to follow up my reading of Silent Spring by reading The Sea Around Us I’ll never know. Maybe the Gulf of Mexico oil leak environmental disaster had somthing to do with my finally picking this book up and reading it.

Carson wrote The Sea Around Us nearly sixty years ago in 1951 and the book is therefore a bit dated. I actually read The Newly Revised, Illustrated Edition, which Carson updated in 1960 with footnotes, but that was fifty years ago, so the science is still a little dated. But Carson’s poetic prose is not. Her command of and passion for science and the environment is communicated in a flowing prose that suggests she is as much a writer as a scientist, and her love of and respect for “that great mother of life, the sea” is evident on almost every page.

After reading on Facebook that I was reading The Sea Around Us while I was at the beach, a friend and colleague who happens to be a College English Professor responded that he recently had his English 101 students read an excerpt from Silent Spring that he chose basically at random out of an anthology. "It was excellent; I had no idea she was such a good writer" he opined. Maybe next time he will assign an excerpt from The Sea Around Us. Better yet, maybe he will offer a course on North American Environmental Writers and Literature which would include the entire text of The Sea Around Us.

The accompanying photo top right was taken at the Cape Hatteras National Seashore on Ocracoke Island during our recent vacation.
Posted by John Edward Harris at 12:01 AM

Email ThisBlogThis!Share to TwitterShare to FacebookShare to Pinterest
Labels: Ocracoke, Rachel Carson, The Sea Around Us

You might want to correct the title of Thoreau's book. And, I concur, you DO have odd habits!

Thanks for catching the Wladen faux pas. There is little physical or literary resemblance between Henry David Thoreau and Henry Fonda.