Review of Belden Lane's "Backpacking with the Saints" 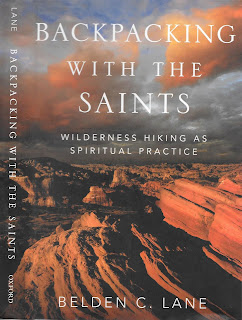 I am not the first person to experience, reflect on, and write about the spiritual dimension of wilderness. Ralph Waldo Emerson, Henry David Thoreau, and John Muir are just three writers in that genre that come immediately to my mind. After reading Backpacking with the Saints: Wilderness Hiking as Spiritual Practice, I will add Belden C. Lane’s name to that list.

A 266 page hardback is not a book most would want to carry in their pack. For those heading out into the wilderness searching for and expecting a spiritual experience, this is a book to be read before heading out. For those who unexpectedly experience something spiritual while in the wilderness, this is a book to be read after you return home to help you debrief.

Belden Lane is Professor Emeritus of Theological Studies, American Religion, and History of Spirituality at Saint Louis University and an ordained Minister in the Presbyterian Church (U.S.A.). His writing immediately betrays his academic credentials as well as his own spiritual and mystical experiences in the wilderness. Each chapter pairs reflections from one of his hiking, backpacking, or kayaking adventures with reflections upon his reading of a saint’s writings during that trip. The narrative is spiced with enough tidbits about Leave No Trace, boots, blisters, stoves, tents, packs, Backpacker Magazine, and trail descriptions and lore to satisfy any hiking or backpacking enthusiast.

Even though Lane writes from a Christian perspective, he unapologetically also draws from Hindu, Buddhist, Jewish, and Muslim spiritual and mystical sources as well secular writers such as Carl Jung, Joseph Campbell, John Muir, Wendell Berry, Edward Abbey, Anne Lamott, and Barbara Kingsolver. When Lane backpacked into Missouri’s Moonshine Hollow, for instance, he carried with him and reflected on the writings of Thich Nhat Hanh. When he journeyed to Missouri’s Taum Sauk Mountain, he took with him and reflected on writings by Jelaluddin Rumi.

While not preachy, the chapters are organized according to a classic understanding of the spiritual journey interpreted through a backpacking metaphor. I think anyone who considers himself or herself “spiritual” or “religious” will relish in the open mindedness of this work along with enough meat to chew on to engage their heart and mind regardless of their religious or spiritual tradition or lack thereof.

I think Backpacking with the Saints: Wilderness Hiking as Spiritual Practice can inform all whose wilderness wanderings and trips include a spiritual dimension.

A slightly longer of this review originally appeared on The Trek.
Posted by John Edward Harris at 12:15 PM