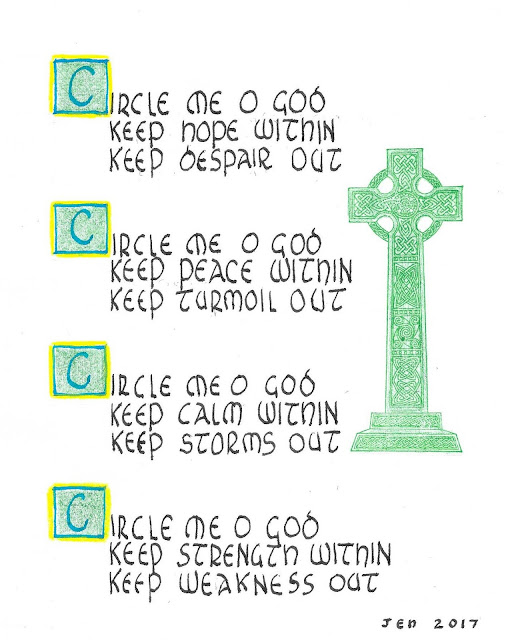 A good friend gave me a Sheaffer Maxi Calligraphy Kit and a fifty sheet Calligraphy Paper Pad for Christmas. The Sheaffer Kit included a small instruction book. I have been learning and practicing calligraphy ever since.

This above is a scanned copy of my latest creation after several failed attempts. The words to the Celtic Caim are not original and slightly different from the traditional. The lettering, my attempt to employ "The Uncial Hand," which according to the instruction book "is often called an 'early Christian' alphabet, as it was used during the 4th and 5th centuries for scriptural texts and sacred writings," and coloring was all done by hand with the exception of the Celtic Cross. I used a rubber stamp and ink pad for the cross and then shaded it with a green colored pencil. The finished piece is 8 x 10.

My renewed interest in calligraphy and illuminated manuscripts has been in part piqued by recently reading about and studying the calligraphy and illuminations of The Saint John's Bible, especially the Gospels and Acts volume. My studying and reading is in preparation for a four day continuing education event called "Illuminating the Text," which will focus, in part, on the Gospels and Acts volume of The Saint John's Bible.

The above illuminated calligraphy also betrays my interest in Celtic Christianity and Celtic Christian illuminated manuscripts, especially The Book of Kells and The Lindisfarne Gospels, both of which I have had the opportunity to see with my own eyes.
Posted by John Edward Harris at 9:29 PM

Thank you. It has been a learning process.

As a former volunteer with the Saint John's Bible Heritage Edition project, I always enjoy discovering blog posts like this where the SJB played a role in inspiring people to explore calligraphy and art.

Thank you Jason. I have yet to see a Saint John's Bible Heritage Edition but hope and plan to do so in February.