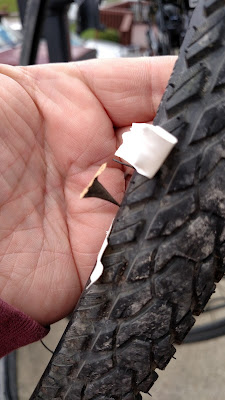 I managed to cycle through my first two seasons, 395 miles in 2014 and 602 miles in 2015, without experiencing a single flat. This season, however, I have already experienced two flats.

I was fortunate that neither flat was catastrophic nor interrupted a ride. In both cases I was not even aware I had experienced a flat until a few days after a ride when I went out to the garage to get my bike to put on the car rack and noticed that the rear tire was flat. The cause of the first flat was obvious as a thorn that had pierced the tire and tube was still lodged into the side wall.

Somehow that thorn managed to stay lodged in the sidewall as I was riding my bike for who knows how long.  It remained lodged while I  loaded my bike onto the rack after the ride, through the ride home, and taking my bike off the rack and wheeling it into the garage. At least it still being lodged there when I discovered the flat made it easy to identify the cause of the flat.

I had read about and watched You Tube videos about fixing flats. I had even practiced patching a tube when I took a bike maintenance workshop at REI. Still, actually taking the rim off the bike, removing the tire and tube from the rim, and patching a tire for the first time, is something I am not sure a cyclist can ever be fully prepared for.

To be honest, I cheated a little. I had purchased a spare tube when I acquired the bike and always carried the tube with me when I rode. Rather than patching the pierced tube and putting it back in the tire I replaced it with the new tube, reinstalled the tire and new tube on the rim, and put the rim back on the bike.

I added more air to the leaking tube and placed it under water in the kitchen sink until I located the leak.  I then patched the leak and after a few minutes inflated the tube. I let it sit in the garage a few days to see if the patch held. It did! The patched tube then served as my spare.

Several weeks later the same thing happened. The only difference was this time there was no thorn sticking out of the side wall or any evidence of a puncture other than a pinhole leak in the tube. I replaced the leaking tube with the one I had earlier patched, patched the leaking tube, and after making sure it held pressure, am using it once again as my spare.

I both instances I was able to put the bike up on the car rack to take the rear wheel off and was able to change out the tube and patch the leaking tube in the comfort of home. The second repair seemed easier take less time than the first because I had already done it once, just a few weeks before. Having done this twice at home I now feel more prepared to do it out in the field if, or when, I have to.


I recommend that you too read a couple articles and watch a few You Tube videos about fixing flats and patching a tube. Always carry a spare tube as well as a patch kit. If you have an old tube around, practice patching it before you need to do it for real.

Here are links to previous installments in the series: