The sudden jerk and sounds of wooden passenger cars creaking, metal wheels straining against metal rail, and escaping steam meant we were moving.  If there was any doubt, the eerie shrill of the locomotive’s whistle signaled the beginning of our evening excursion.  From the old logging town of Cass, at 2,442 feet, we were headed for Bald Knob, West Virginia’s third highest peak at 4,482 feet, and a mountain view of August’s Supermoon and Perseid Meteor Shower. 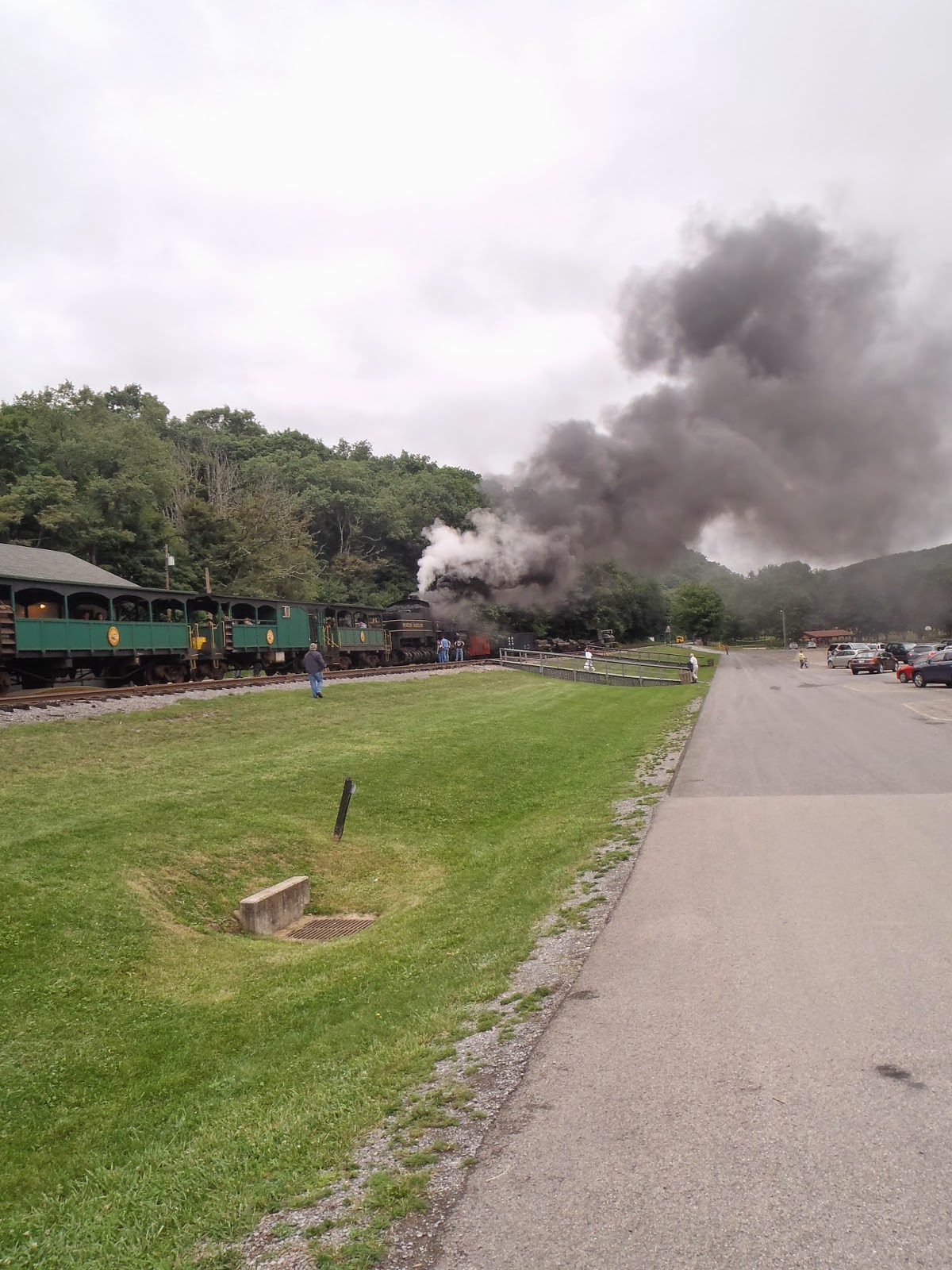 I am not a train aficionado but as a young boy I played with model trains in several gauges.  Last Christmas I set up a LGB “G Scale” train under the Christmas tree around its base.  This was only the second time in my life, however, that I had been aboard a passenger train pulled and pushed by a working historic steam locomotive. The other time was a few years ago aboard the Wanamaker, Kempton and Southern Railroad, or Hawk Mtn. Line, in Berks County, Pa. On a recent evening it was West Virginia’s Cass Scenic Railroad.

I may not be a railroad buff but I am a born and raised in West Virginian Mountaineer. I love the rough peaks and valleys of the Allegheny Highlands, from Dolly Sods’ Bear Rocks to the towering faces of Seneca Rocks and the wind swept summit of Spruce Knob.  I also love learning about my native state’s mountain culture and history. It was only recently, however that I experienced an excursion on the Cass Scenic Railroad and experienced not only the summit of Bald Knob but a taste of West Virginia’s logging history. 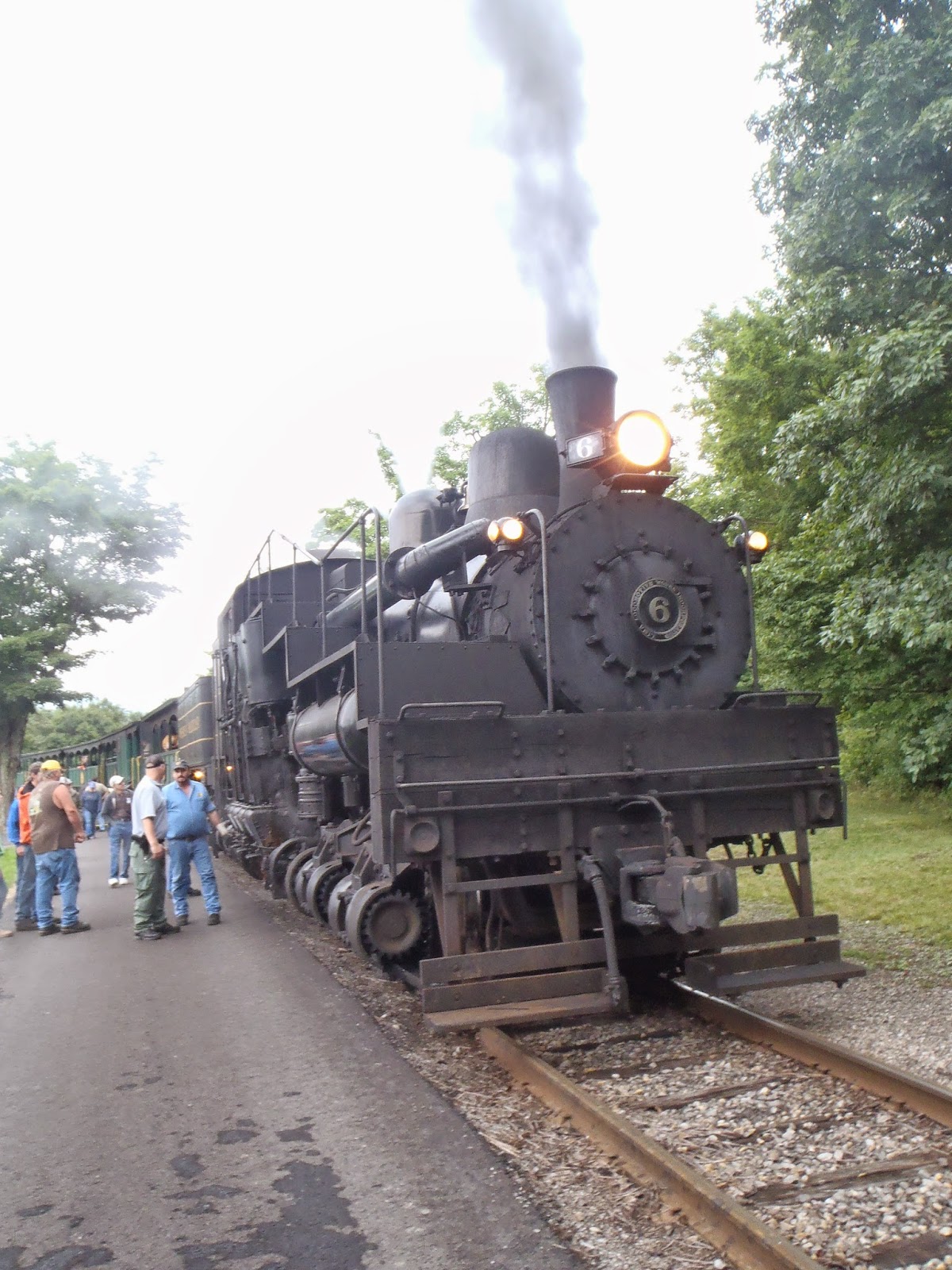 When Shay No. 6, a 162 ton steam locomotive built for coal service on the Western Maryland Railway, left the station and began pulling four or five covered but open air passenger cars up the mountain toward Bald Knob, I was not sure what to expect.  A member of the crew occasionally informed us about natural and historical sites as we slowly rolled through the train yard and up the mountain.  A few minutes after leaving the station all signs of modern civilization were behind us.

Through thick Appalachian forest we climbed, sometimes up a phenomenal9 % grade,  an occasional clearing affording panoramic views of near and distant hillsides covered in trees , wisps of fog, and occasional evening sun, the higher summits enshrouded in clouds. Twice we came to a stop as the train changed directions on switchbacks too steep and too narrow for a curve. 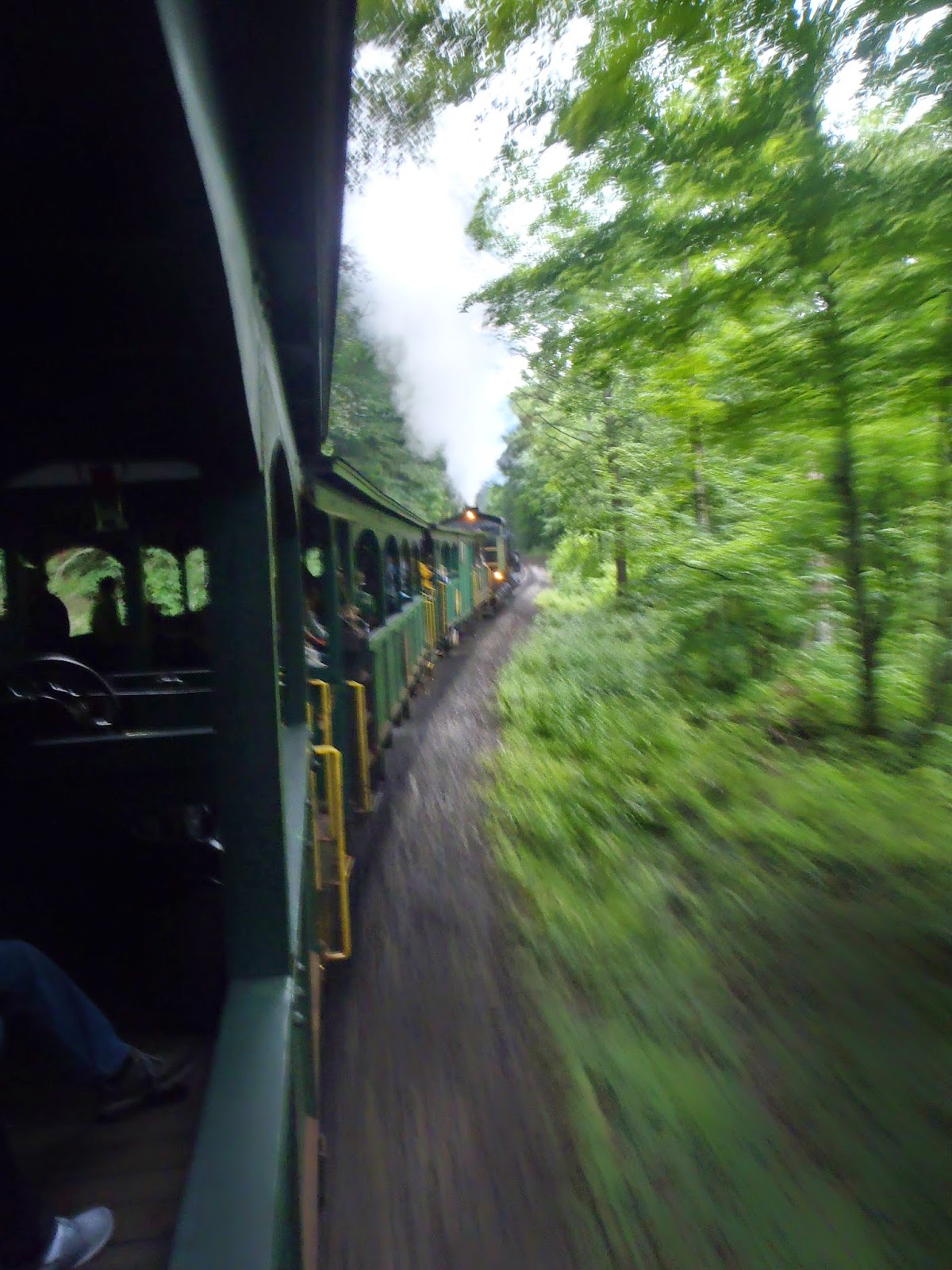 A stop at Whittaker Station, elevation 3,264 feet, afforded a chance to get off the train, stretch legs, explore a recreated 1940’s logging camp, use modern rest rooms, and take some close-ups of the mighty locomotive, built in the 940’s,  pulling us up the mountain.

Between Whitaker and Bald Knob the train stopped again, this time at a spring to take on water for the boiler, but we were not allowed off the train.

When we arrived near the top of Bald Knob, over two and a half hours after leaving Cass, eleven miles of track behind us, the mountain was enveloped by low clouds.  We disembarked there was no Supermoon or meteor shower to be seen.  The view from the scenic overlook was nothing but cloud and mist.  We still enjoyed complimentary beverages; mine an RC, and Moon Pies.

Eventually the locomotive’s whistle blew, signaling us to get back on the train.  We descended at a quicker pace than our climb, and with no stop to take on water or at Whittaker Station, we arrived back at Cass in less than two hours.
I cannot explain why it took this Mountaineer so long to finally experience the Cass Scenic Railroad but I am glad I finally did.  I look forward to a return visit when I have time to explore the town of Cass and other attractions associated with the Cass Scenic Railroad State Park.
Posted by John Edward Harris at 12:41 PM