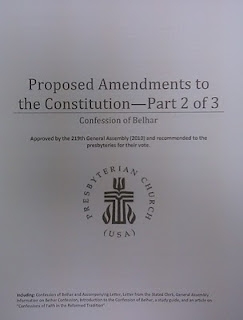 It is not every day that Presbyterian Church (U.S.A.)  Ministers and Elders get to vote of amending our church’s confessional documents. In fact, the opportunity has presented itself only three times in the past twenty-eight years. In 1991 we added A Brief Statement of Faith—Presbyterian Church (U.S.A.) to our Book of Confessions.  In 1999 we amended the language of the Nicene Creed to reflect a growing ecumenical consensus concerning its liturgical use.

Ministers and Elders of the PC(USA) are now considering whether or not to amend the Book of Confessions by adding the Confession of Belhar.  To do so would require that two thirds of the presbyteries concur with the amendment. So far, the voting is close, hovering around that two-thirds mark.

The Confession of Belhar was born in 1982 in the midst of apartheid. The confession, named after a suburb of Cape Town, was not so much the Dutch Reformed Mission Church’s response to apartheid but to the heretical theology that buttressed it.

The confessional bravery and theological astuteness of those who drafted and adopted the Belhar Confession, and the confession itself, have both challenged and encouraged Christians around the world. If the PC(USA) adopts this confession, it would be the first, and the only one out of eleven other confessional statements in the Book of Confessions, from the Southern Hemisphere.

I think the PC(USA) should adopt it. With our nation’s history of slavery and Jim Crow, and the Presbyterian history of splitting along Union and Confederate lines at the time of the Civil War, the Confession of Belhar forces us to confront our past. With our nation’s current debate around issues of race, including issues of immigration, and the appearance that Sunday morning is still the most segregated hour in America, the Confession of Belhar ca help us examine present practices and behavior.

New York City Presbytery, of which I am a Minister member, considered and voted on adding the Confession of Belhar to the Book of Confessions at its most recent meeting, held January 25, 2011. I experienced a heightened sense of the historic importance of what we were doing as we debated the issue. The hairs on the back of my neck were about to rise as the momentous nature of the vote sunk into my consciousness.

The vote was not at all close. The “yeas” were 96. The “nays” were 0, zip, nada. The Presbytery of New York City had voted unanimously to concur with adding the Confession of Belhar to the Book of Confessions! The sanctuary where we were meeting erupted with applause as the result of the vote was announced.

I am not always proud of what we New York City Presbyterians do and do not do in our presbytery meetings, but on this occasion, I was most proud of my colleagues in Ministry. I hope that by the time all the presbyteries vote, I will be as proud to be a member of the Presbyterian Church (U.S.A.) as I was proud to be a member of New York City Presbytery on January 25, 2011.
Posted by John Edward Harris at 12:01 PM