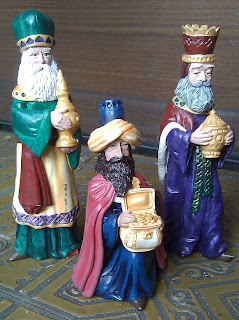 The Feast of Epiphany, the Feast of Three Kings, by whatever name it is called, it is today, January 6, 2011. In previous years, congregations I have served have marked this feast with an evening Service of the Word, including celebration of the Eucharist, but not this year. Sadly, there seemed to be little interest in it. Attendance has never been that great, but I always enjoyed leading the service.

I have thought it would be fun for worshipers to go outside after worship and, with a powerful home telescope, to engage in some star gazing, but that has never happened.

Read Matthew 2:1-12 for yourself, without reading it through the lenses of carols, cantatas, plays, stories, or other cultural glosses. Be sure to read the footnotes that explain “wise men” is, in the Greek, Magi.

I think of the Magi as Babylonian (or perhaps Zoroastrian) astrologers/astronomers, who followed a star according to their star chart inspired universal planetary horoscope . . . that is if there really were Magi visiting the manger. The account occurs only in Matthew and is not essential to the Gospel story. On the other hand, I think the Gospel story would be impoverished without it.

I think some of the best ruminations on the Magi has come from John Shelby Spong, which tells you a lot about where I am coming from.
Posted by John Edward Harris at 4:03 PM

Email ThisBlogThis!Share to TwitterShare to FacebookShare to Pinterest
Labels: Epiphany