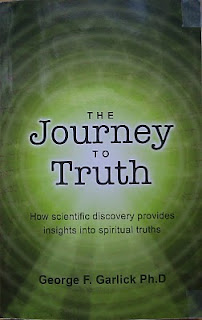 The Journey To Truth: How Scientific Discovery Provides Insights Into Spiritual Truths
by George F Garlick Ph.D. VMI Publishers 2009, 145 pp., $14.99 paperback
I consider myself a pastor, theologian, and amateur philosopher, not a scientist. Nevertheless I love science even though my academic scientific training is limited to High School Physics and Chemistry. George F Garlick is a Scientist and readily admits that he is no theologian. Nevertheless his familiarity with western philosophers such as Leibniz and Pascal as well as Christian Scripture and theology is evident.
Garlick's inspirational and autobiographical book The Journey To Truth: How Scientific Discovery Provides Insights Into Spiritual Truths is an example of faith seeking understanding as he documents how he has wrestled to reconcile and synthesize his religious beliefs with recent scientific discoveries. Since Garlick assumes that humans are spiritual beings, this is not a Christian apology written for atheists or agnostics but rather a meditation for people of faith who, like Garlick, seek to understand their faith in light or the latest metaphysics. To his credit, Garlick occasionally employs picturesque metaphors like a poet as he seeks to present his “understanding of scientific facts and new scientific theories as honestly as possible and then demonstrate how they can help us interpret the truths of challenging passages in Scripture.” I think his science, however, is better than his theology and biblical interpretation.
I easily followed Garlick’s discussion of the Big Bang, the fifth dimension and superstring theory, but some less scientifically inclined readers might find the level of science he brings into dialogue with his religion a bit overwhelming. While I resonated with some of his application of scientific theories to theology, being thoroughly schooled in and committed to inclusive language I was a bit put off by his exclusive use of male pronouns to refer to God and a little disappointed when his reading of Scripture was far more literal than my own.
At times I felt that Garlick’s synthesis of science and religion was a bit schizophrenic. For instance I think he came close to defining God as the infinite unified energy of the Big Bang while at the same time holding fast to defending the factual reality of miracles rather than interpreting them as mytho-poetic reflections of spiritual, not physical, realities. I was also put off by his out of pocket rejection of Process Theology, which I think offers more possibilities for a synthesis of the Christian faith and metaphysics than traditional theology. And while Garlick’s religion and religious truths are predominantly Christian, I often found myself thinking that his arguments and examples could also be applied to the truths of other religious systems, but he did not go there. He did not even hint of going there as a possibility.
On the whole, I found Garlick’s science engaging but nothing new. I found his theology and biblical interpretation a little wanting. On the other hand, a more moderate to conservative and less scientifically minded reader than me could easily find their faith both enriched and stretched as they are exposed to some of the latest cosmology.
Posted by John Edward Harris at 12:01 AM